A 5.5-magnitude earthquake was recorded off the waters of southern Puerto Rico early Saturday, rattling the city of Ponce, according to the US Geological Survey.

Prisoners are being released early over fears coronavirus will spread through correctional facilities, but victims say many of those let off has been involved in violent crimes.

ACTION: NOTICE REPORTING ON FEMA’S PROCUREMENT OF REINSURANCE FOR THE NATIONAL FLOOD INSURANCE PROGRAM PURSUANT TO THE REVISED AGREEMENT ON GOVERNMENT PROCUREMENT (April 6, 2014) .

COVID-19 impact could be ‘disastrously high’ in poverty-stricken Malawi In Malawi, one of the world’s poorest countries, with a fragile health system, the UN is bracing for the impact of the COVID-19 pandemic which, it is feared, could be severe.

Muslims in India have been attacked after a religious gathering in the capital allegedly led to a rise in coronavirus cases, with the minority being blamed for the spread of the disease.

Boris Johnson names son after doctors who saved his life 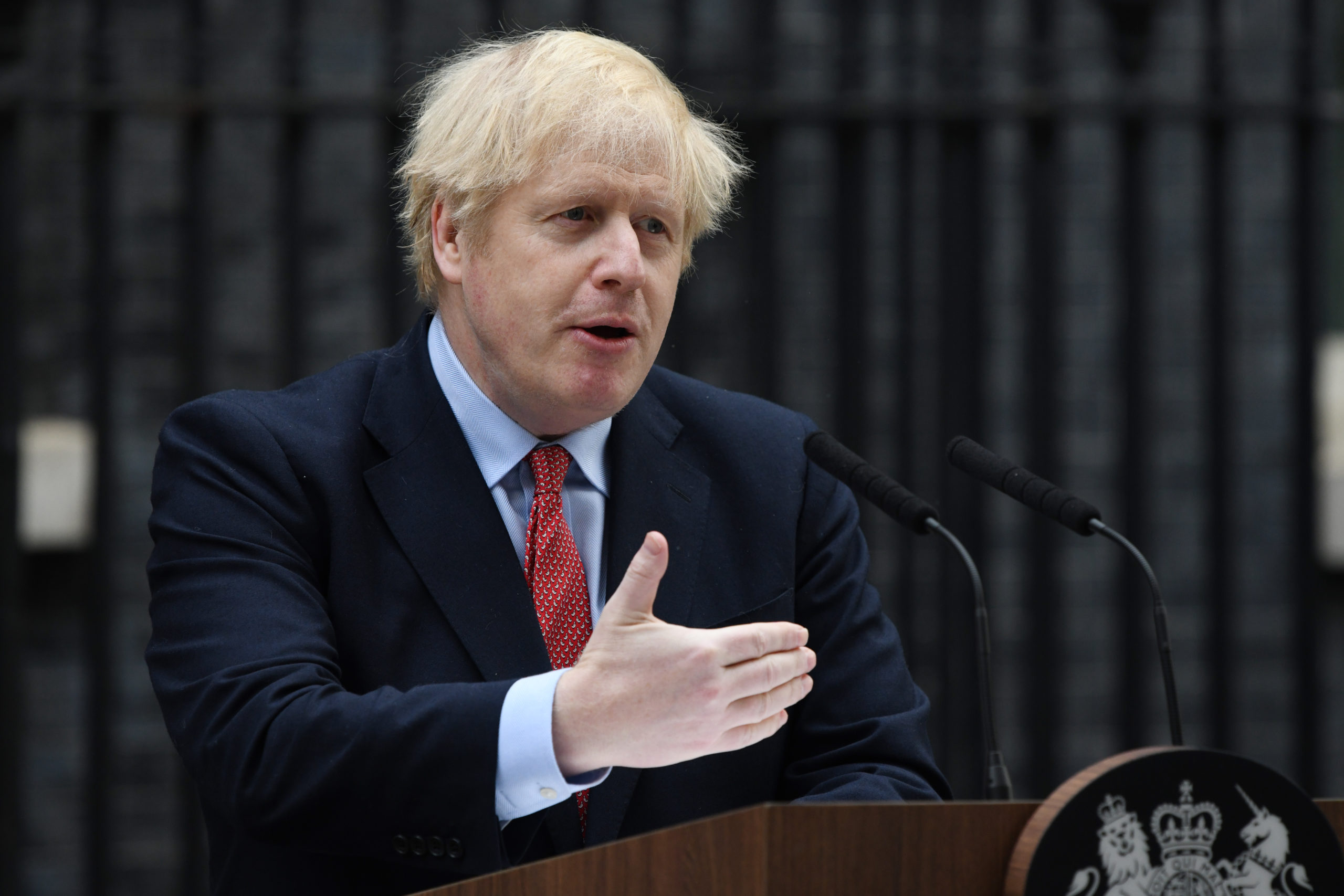 Symonds made the announcement on Instagram, saying that the baby’s first two names are in honor of Johnson’s grandfather and her grandfather, respectively.

She added that the third name Nicholas was chosen in honor of two doctors, Dr Nicholas Price and Dr Nicholas Hart, who treated Johnson while he was battling COVID-19 in intensive care last month.

COVID-19 outbreaks have been reported at some of the country’s most overcrowded jails, affecting both inmates and staff.

About 20,000 migrant workers poured into Myanmar through a central land border crossing in recent days, returning from jobs in neighboring Thailand amid the ongoing COVID-19 pandemic, a state official said Friday — a day that several countries in Southeast Asia celebrate as Labor Day.

Tens of thousands of migrant laborers have been flooding into Myanmar in recent weeks after losing their factory and farm jobs in both Thailand and China. They left when owners temporarily shuttered plants or scaled back hiring amid the spread of the coronavirus.

The 20,000 workers who crossed into Myanmar during the past three days via Myawaddy Bridge-2, also known as the Myanmar-Thai Friendship Bridge-2, connecting Thailand’s Mae Sot with Myawaddy in southeastern Myanmar’s Kayin state, overwhelmed state officials who expected significantly smaller crowds, according to the Myanmar Embassy in Bangkok.

The embassy declined to answer RFA’s questions about the returnees.

“There’s been some difficulties because of orders issued by the Thai government and discussions that we should ease some conditions to ensure a systematic return,” he said. “There are some buses coming over our side. We have expected 2,500-some returnees a day.”

In March, more than 40,000 migrant workers returned to Myanmar, prompting the government to appeal to appeal to others to return only after April 15, later extending the date to the end of the month, to give officials time to set up shelters in which to quarantine the laborers.

The Myanmar government requires returning migrant workers to be quarantined for 14 days to ensure they are not infected with the COVID-19 virus.

Myanmar worker groups in Thailand said that the Myanmar government should negotiate carefully with Thai authorities who have an order in place forbidding groups from traveling to prevent the spread of the virus.

“Myanmar authorities should discuss with the Thai government about reducing its emergency rules for Myanmar workers along border areas such as Mae Sot and Tak, so they can move freely during the virus epidemic,” said Moe Gyo, chairman of the Mae Sot-based Myanmar Citizens Affairs’ Committee.

Activists who advocate for Myanmar workers’ rights said that the situation has been made worse because Thai authorities holding up returning workers are not providing them with food or health care.

Some of those who have already returned are being housed in large quarantine camps.

“There are over 10 quarantine camps with about 2,000 people in Myawaddy,” said Thant Sin Aung, a Kayin state lawmaker who represents Myawaddy. “We have been preparing for more camps in Myawaddy and Hpa-an. It would be more effective if the regional governments could bring their people together.”

So far, all returning laborers, regardless of where they live in Myanmar, have been sent to Kayin and Mon states for quarantine before being allowed to continue their journeys. Some, however, have been stuck in Myanmar border towns after local authorities closed down main roads to traffic.

Myanmar nationals comprise the largest migrant worker population in Thailand, with recent estimates putting the figure at 2.3 million people, according to an August 2019 report on Myanmar migrants in Thailand issued by the International Organization for Migration.

‘We want to go home’

Most Lao migrant workers in Thailand, meanwhile, say they would return home if the government opened land border crossings, because they too have lost their jobs as a result of recent factory shutdowns

They said that even though the Thai government has canceled some of the measures it put in place to control the spread of COVID-19, an emergency order remains in place until the end of May.

But by that time, most Lao workers will still not have jobs and will not be able to stay in Thailand any longer, they said

“We want to go home” said one Lao laborer who declined to be named. “If there is no work to do, we have to go home because if we stay any longer we will still have nothing to do, but continue to spend money,” he said.

Another Lao worker in Thailand said that he is waiting until the Lao government opens the border crossings so he can return. As for now, however, he has no work or income to pay for rent, food, or electricity.

“If we don’t have work, it makes no sense to stay because we came from far away to work here,” said the worker who requested anonymity, adding that he is willing to comply with the Lao government’s order for people entering the country to remain in quarantine for 14 days.

An official from the Department of Labor and Social Welfare  in Savannakhet province told RFA’s Laos Service that officials there must wait until after May 3 to see if they receive notice from the central government to open border crossings.

If they do, then officials will allow Lao migrant workers from Thailand to enter Laos but will quarantine them for 14 days, said the official who declined to give his name because he is not authorized to speak to the media.

“Every province and district will notify facilities to quarantine workers who return home,” he said

An official from a quarantine facility in Savannakhet’s Outhomphone district said all districts will be ready to handle returning workers return after May 3 if they receive an order to open land border crossing.

An official from Champassak province in southwestern Laos confirmed also said authorities there were waiting to receive notice to open land border crossings.

“We have to wait a little,” said the official who did not provide his name because he was not authorized to speak to the media. “[The borders] will not be open to everybody — only to allow our citizens who were working in Thailand.

Another Lao official also reported that all provinces are ready to accept Lao workers returning from Thailand and that the government will set up facilities where they will stay temporarily during medical checks and the mandatory quarantines before being allowed to go back to their villages.

Humat News provides global humanitarian stories, highlighting development, featuring organizations, and covering crisis events as they unfold. We bring the public the most relevant, non-partisan information as quickly as possible to empower the public for humanity's sake.
Contact us: info@humatnews.com
© Copyright 2021 - Humat News by Humat, LLC